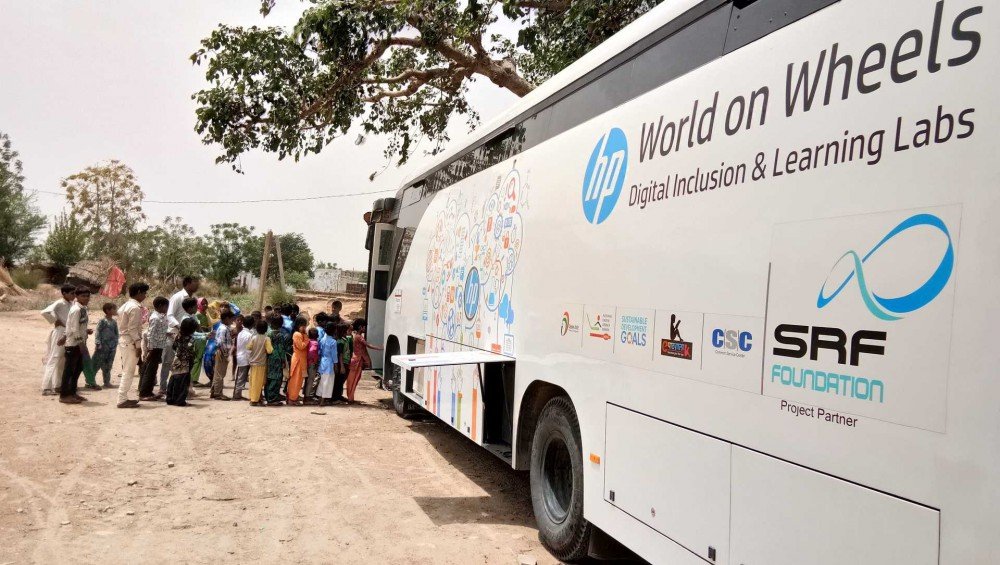 The program aims to reach 6,400 Indian villages, impacting more than 15 million people over the next six years. Each 20-seat, IT-enabled HP WoW digital inclusion and learning lab will be equipped with HP computing and printing equipment, such as HP Thin Clients, an HP Workstation, and an HP OfficeJet all-in-one printer, as well as software suites and e-learning tools, like HP Classroom Manager and HP VideoBook. The classrooms will allow individuals to gain access to IT literacy programs and connect to different government programs.

“As we work to create technology that makes life better for everyone, everywhere, we recognize that a big gap remains between those who have access, and those who don’t,” said Nate Hurst, Chief Sustainability and Social Impact Officer, HP. “We’re thrilled to take another step forward in helping bridge the divide with HP World on Wheels, bringing quality education, entrepreneurship training, and access to essential services to people right where they are.”

The digital inclusion and learning labs are designed with leading technology to reduce emissions and maximize energy efficiency. Each mobile lab will be powered by 10 high-efficiency solar panels of 315 watts each, generating nearly 15 kilowatts of energy daily—which is almost 20 percent higher than the lab’s daily energy requirements. The vehicles that carry the labs are also BSIII compliant, emitting the least possible GH gases in their category, and use the least horsepower (120 HP) in their category making them more fuel efficient.

HP’s World on Wheels builds on the company’s commitment to reinvent digital learning across the globe. As part of this initiative, HP and the HP Foundation collaborate with the United Nations and national non-profits to provide business, IT, and entrepreneurship training online and face-to-face in countries such as the United States, Myanmar, and Tunisia. In India, HP has deployed seven container-based “Future Classrooms” in rural areas. HP has also addressed the need for technology and connectivity in refugee camps by collaborating with the United Nations High Commissioner for Refugees (UNHCR) to support Community Technology Access (CTA) centres in 26 countries.